Welcome to the World of Suzanne Burke.

It's a writers world, a world that seeks to explore and entertain 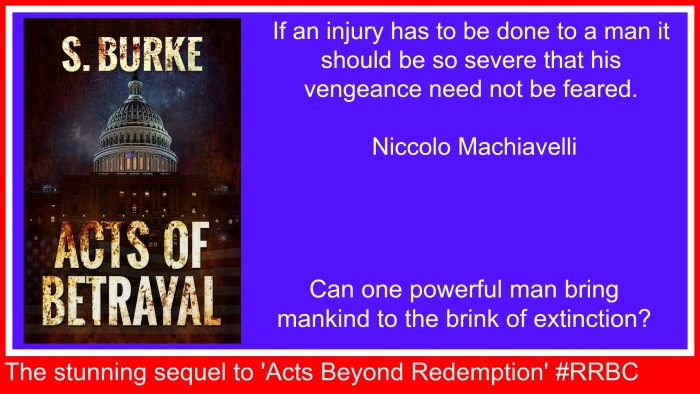 Can one powerful man bring mankind to the brink of extinction?

In this powerful sequel to Acts Beyond Redemption, Nigel Cantrell is back, and he’s out for blood.
One of his team holds on precariously to life, with no guarantees of recovery.

Can those responsible drag him into a nightmare he will struggle to contain?

In a complex dual where oaths taken are forsaken, and promises made are broken beyond repair, he must seek the help of the only people he can trust … people who revere him … and, those that despise him.

Cantrell is efficient and deadly, but even he has ghosts in his past, demons, that must be exorcised.  Nothing is more demonic than the peril he must now face, as a one man’s maniacal thirst for revenge is uncovered.
A man so enormously powerful, with a hatred so intense, so extreme, that the possible demise of his own species means nothing to him. He will dispense his revenge as his diseased mind sees fit.

Nigel Cantrell and his team do not have failure as an option.
The fate of their country and beyond now rests in their hands.
Can they prevent the final Acts of Betrayal?

Acts Of Betrayal on AMAZON.Com

My Brain's Not Broken

Author of : The Wizard, The Girl and The Unicorn's Horn

How you see life depends on how you look at things